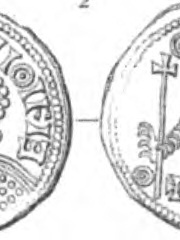 Sweyn II Estridsson (Old Norse: Sveinn Ástríðarson, Danish: Svend Estridsen) (c. 1019 – 28 April 1076) was King of Denmark from 1047 until his death in 1076. He was the son of Ulf Thorgilsson and Estrid Svendsdatter, and the grandson of King Sweyn I Forkbeard through his mother's line. Read more on Wikipedia

Since 2007, the English Wikipedia page of Sweyn II of Denmark has received more than 248,343 page views. His biography is available in 35 different languages on Wikipedia making him the 2,112th most popular politician.

Page views of Sweyn II of Denmarks by language

Among politicians, Sweyn II of Denmark ranks 2,097 out of 14,801. Before him are Vannozza dei Cattanei, Victor Emmanuel I of Sardinia, Bernardo O'Higgins, Nikola IV Zrinski, Amalric of Jerusalem, and Prokopis Pavlopoulos. After him are Krum, Ambrogio Spinola, 1st Marquess of Balbases, Ferdinand Karl, Archduke of Austria-Este, Benazir Bhutto, Emperor Ruizong of Tang, and Louis the Blind.

Among people born in 1020, Sweyn II of Denmark ranks 3. Before him are Pope Gregory VII and Pope Stephen IX. After him are Yūsuf Balasaguni, Constantine the African, Su Song, Guo Xi, Zhang Zai, Adelaide of Susa, Gunhilda of Denmark, Otto of Nordheim, and Vladimir of Novgorod. Among people deceased in 1076, Sweyn II of Denmark ranks 1. After him are Robert I, Duke of Burgundy, Ramon Berenguer I, Count of Barcelona, Godfrey IV, Duke of Lower Lorraine, Sancho IV of Pamplona, Beatrice of Lorraine, and Ermengarde of Anjou, Duchess of Burgundy.