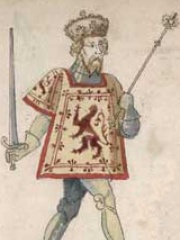 Robert II (2 March 1316 – 19 April 1390) was King of Scots from 1371 to his death in 1390. He was the first monarch of the House of Stewart as the son of Walter Stewart, 6th High Steward of Scotland, and of Marjorie Bruce, daughter of the Scottish king Robert the Bruce by his first wife Isabella of Mar. Edward Bruce, younger brother of Robert the Bruce, was named heir presumptive but died without heirs on 3 December 1318. Read more on Wikipedia

Robert II of Scotland, also known as Robert the Bruce, was most famous for his victory over England in the Battle of Bannockburn.

Page views of Robert II of Scotlands by language

Among politicians, Robert II of Scotland ranks 1,792 out of 15,710. Before him are Pescennius Niger, Sabah Al-Ahmad Al-Jaber Al-Sabah, Vitiges, Rugila, Georgios Papadopoulos, and Roh Tae-woo. After him are Cleopatra III of Egypt, Amalric of Jerusalem, Rastislav of Moravia, Michael VI Bringas, Sirimavo Bandaranaike, and Princess Sibylla of Saxe-Coburg and Gotha.

Among people born in 1316, Robert II of Scotland ranks 4. Before him are Charles IV, Holy Roman Emperor, John I of France, and Magnus IV of Sweden. After him are Simeon of Moscow, Blanche of Valois, Albert of Saxony, Fa Ngum, and John of Eltham, Earl of Cornwall. Among people deceased in 1390, Robert II of Scotland ranks 1. After him are John I of Castile, Baha-ud-Din Naqshband Bukhari, Alexios III of Trebizond, Altichiero, Albert of Saxony, Rupert I, Elector Palatine, Keratsa of Bulgaria, and Dorothea of Bulgaria.