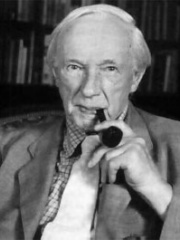 George Edward Moore (4 November 1873 – 24 October 1958) was an English philosopher who, along with Bertrand Russell, Ludwig Wittgenstein and earlier Gottlob Frege, was among the founders of analytic philosophy. He and Russell led the turn from idealism in British philosophy, and became known for advocating common-sense concepts and contributing to ethics, epistemology and metaphysics. He was said to have an "exceptional personality and moral character". Read more on Wikipedia

G. E. Moore is most famous for his work in ethics and philosophy of mind. He is also the founder of the school of analytic philosophy.

Among philosophers, G. E. Moore ranks 273 out of 1,089. Before him are Vladimir Solovyov, Hugh of Saint Victor, Aristoxenus, Adam of Bremen, Ammonius Saccas, and Carneades. After him are Sri Aurobindo, Cleanthes, François Fénelon, Johann Reuchlin, Rudolf Bultmann, and Georges Sorel.