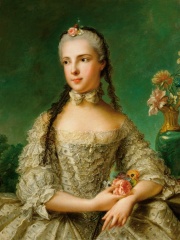 Isabella of Bourbon-Parma (Spanish: Isabel María Luisa Antonieta Fernanda Josefa Javiera Dominica Juana de Borbón-Parma, German: Isabella Maria Luise Antonia Ferdinanda Josepha Xaveria Dominika Johanna von Bourbon-Parma; 31 December 1741 – 27 November 1763) was a princess of Parma[3] and infanta of Spain from the House of Bourbon-Parma as the daughter of Philip, Duke of Parma. She became an archduchess of Austria and princess of Bohemia and Hungary in 1760 by her marriage to Archduke Joseph of Austria, the future Joseph II, Holy Roman Emperor.Although her husband loved her, she did not fully return his feelings and found more fulfillment in her (likely romantic, possibly sexual) relationship with her sister-in-law, Archduchess Maria Christina. The loss of her beloved mother, an arranged marriage in which she was unhappy, a court life that did not fit her, and a difficult birth followed closely by two miscarriages and another hard pregnancy all affected her mental health, leading to a depression. Read more on Wikipedia

Princess Isabella of Parma was most famous for being the wife of Charles II of Spain and the mother of two Spanish kings.

Page views of Princess Isabella of Parmas by language

Among politicians, Princess Isabella of Parma ranks 1,990 out of 15,577. Before her are Damdin Sükhbaatar, Nicolas Fouquet, Princess Joséphine Charlotte of Belgium, Eric the Victorious, Yakov Sverdlov, and Heinrich Brüning. After her are Victor Emmanuel I of Sardinia, Richard II, Duke of Normandy, Injong of Joseon, Ram Nath Kovind, Jeongjong, 3rd monarch of Goryeo, and Boniface I, Marquess of Montferrat.