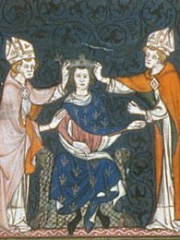 Louis II, known as Louis the Stammerer (French: Louis le Bègue; 1 November 846 – 10 April 879), was the king of Aquitaine and later the king of West Francia. He was the eldest son of Emperor Charles the Bald and Ermentrude of Orléans. Read more on Wikipedia

Louis the stammerer is most famous for being the son of Charlemagne and for his inability to speak fluently.

Page views of Louis the Stammerers by language

Among politicians, Louis the Stammerer ranks 691 out of 15,577. Before him are Franjo Tuđman, Afonso I of Portugal, Augustus III of Poland, Nebuchadnezzar I, Gwangjong of Goryeo, and Robert Gascoyne-Cecil, 3rd Marquess of Salisbury. After him are Albert I of Belgium, Yuan Shikai, Enver Pasha, Edvard Beneš, Louis Mountbatten, 1st Earl Mountbatten of Burma, and Enrico Dandolo.