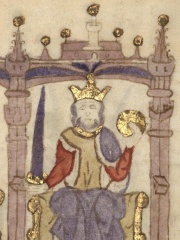 Afonso I of Portugal

Afonso I (Portuguese pronunciation: [ɐˈfõsu]; 1106 / 25 July 1109 / August 1109 / 1111 – 6 December 1185), nicknamed the Conqueror (Portuguese: O Conquistador), the Founder (O Fundador) or the Great (O Grande) by the Portuguese, and El-Bortukali ([in Arabic البرتقالي] "the Portuguese") and Ibn-Arrink or Ibn Arrinq ([in Arabic ابن الرَّنك or ابن الرَنْق] "son of Henry", "Henriques") by the Moors whom he fought, was the first king of Portugal. He achieved the independence of the County of Portugal, establishing a new kingdom and doubling its area with the Reconquista, an objective that he pursued until his death. Afonso was the son of Teresa of León and Henry of Burgundy, rulers of the County of Portugal. Read more on Wikipedia

Since 2007, the English Wikipedia page of Afonso I of Portugal has received more than 479,528 page views. His biography is available in 60 different languages on Wikipedia making him the 657th most popular politician.

Page views of Afonso I of Portugals by language

Among politicians, Afonso I of Portugal ranks 652 out of 14,801. Before him are Chlothar I, Süleyman Demirel, Albert I of Belgium, Tigranes the Great, Leo III the Isaurian, and Camillo Benso, Count of Cavour. After him are Conrad III of Germany, Yaroslav the Wise, John Zápolya, Sima Yi, Edvard Beneš, and Ivan III of Russia.

Among people born in 1109, Afonso I of Portugal ranks 1. After him are Bertrand de Blanchefort, Ar-Rashid, and Helena of Serbia, Queen of Hungary. Among people deceased in 1185, Afonso I of Portugal ranks 2. Before him is Baldwin IV of Jerusalem. After him are Chrétien de Troyes, Andronikos I Komnenos, Pope Lucius III, Bhāskara II, Ibn Tufail, Emperor Antoku, Agnes of Courtenay, Richeza of Poland, Queen of Castile, Beatrice of Rethel, and John Kinnamos.