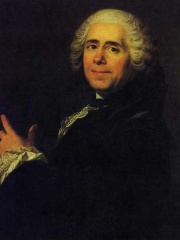 Pierre Carlet de Chamblain de Marivaux (4 February 1688 – 12 February 1763), commonly referred to as Marivaux, was a French playwright and novelist. He is considered one of the most important French playwrights of the 18th century, writing numerous comedies for the Comédie-Française and the Comédie-Italienne of Paris. His most important works are Le Triomphe de l'amour, Le Jeu de l'amour et du hasard and Les Fausses Confidences. Read more on Wikipedia

Pierre de Marivaux is most famous for his play, "The Game of Love and Chance," which is a comedy about a man who tries to win the heart of a woman by playing cards.

Among writers, Pierre de Marivaux ranks 1,212 out of 5,755. Before him are David Grossman, Shammai, Dean Koontz, Stanisław Jerzy Lec, Alexander Ostrovsky, and Timaeus of Locri. After him are Achilles Tatius, Aleksey Konstantinovich Tolstoy, Aristophanes of Byzantium, James Anderson, Shi Nai'an, and Aelius Aristides.