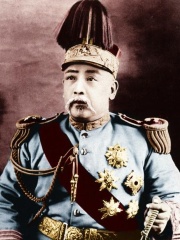 Yuan Shikai (Chinese: 袁世凱; pinyin: Yuán Shìkǎi; 16 September 1859 – 6 June 1916) was a Chinese military and government official who rose to power during the late Qing dynasty and eventually ended the Qing dynasty rule of China in 1912, later becoming the Emperor of China. He first tried to save the dynasty with a number of modernization projects including bureaucratic, fiscal, judicial, educational, and other reforms, despite playing a key part in the failure of the Hundred Days' Reform. He established the first modern army and a more efficient provincial government in North China during the last years of the Qing dynasty before forcing the abdication of the Xuantong Emperor, the last monarch of the Qing dynasty in 1912. Read more on Wikipedia

Yuan Shikai was most famous for his role in the overthrow of the Qing Dynasty.

Among politicians, Yuan Shikai ranks 693 out of 15,577. Before him are Augustus III of Poland, Nebuchadnezzar I, Gwangjong of Goryeo, Robert Gascoyne-Cecil, 3rd Marquess of Salisbury, Louis the Stammerer, and Albert I of Belgium. After him are Enver Pasha, Edvard Beneš, Louis Mountbatten, 1st Earl Mountbatten of Burma, Enrico Dandolo, Childeric III, and Henry I of England.