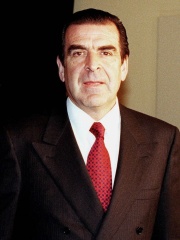 Eduardo Alfredo Juan Bernardo Frei Ruiz–Tagle (Spanish pronunciation: [eˈðwaɾðo alˈfɾeðo ˈxwam beɾˈnaɾðo ˈfɾej rwis ˈtaɣle]; born 24 June 1942) is a Chilean politician and civil engineer who served as president of Chile from 1994 to 2000. He was also a Senator, fulfilling the role of President of the Senate from 2006 to 2008. He attempted a comeback as the candidate of the ruling Concertación coalition for the 2009 presidential election, but was narrowly defeated. Read more on Wikipedia

Among politicians, Eduardo Frei Ruiz-Tagle ranks 5,647 out of 15,710. Before him are Rhadamistus, Jean-Lambert Tallien, Charles-François Lebrun, Dadabhai Naoroji, Spiro Agnew, and Miltiades the Elder. After him are Miran Shah, William Cavendish, 4th Duke of Devonshire, Tutush I, Kenneth III of Scotland, Emperor Go-Suzaku, and Franz Gürtner.