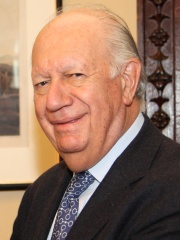 Ricardo Froilán Lagos Escobar (Spanish pronunciation: [riˈkaɾðo fɾojˈlan ˈlaɣos eskoˈβaɾ]; born 2 March 1938) is a Chilean lawyer, economist and social-democratic politician who served as President of Chile from 2000 to 2006. He won the 1999-2000 presidential election by a narrow margin in a runoff over Independent Democrat Union (UDI) candidate Joaquín Lavín. Lagos was the third president from the center-left Coalition of Parties for Democracy to have ruled Chile since 1990. Read more on Wikipedia

Among politicians, Ricardo Lagos ranks 4,544 out of 15,710. Before him are Rainier I of Monaco, Lord of Cagnes, László Sólyom, Sten Sture the Younger, Gunther, Josef Bühler, and Gaston Thorn. After him are Anawrahta, Hetepheres II, Giovanni Sforza, Frederick II, Elector of Brandenburg, Rudolf Brandt, and Julia Flavia.