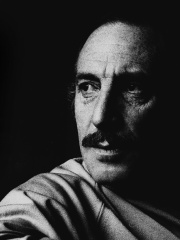 Marcos Orlando Letelier del Solar (13 April 1932 – 21 September 1976) was a Chilean economist, politician and diplomat during the presidency of Salvador Allende. A refugee from the military dictatorship of General Augusto Pinochet, Letelier accepted several academic positions in Washington, D.C. following his exile from Chile. In 1976, agents of Dirección de Inteligencia Nacional (DINA), the Pinochet regime's secret police, assassinated Letelier in Washington via the use of a car bomb. Read more on Wikipedia

Among politicians, Orlando Letelier ranks 7,295 out of 15,577. Before him are Paavo Lipponen, Julio María Sanguinetti, Jacob Schiff, Cao Kun, John II, Duke of Brabant, and Gnaeus Cornelius Lentulus Clodianus. After him are Osorkon the Elder, Manuel Fraga, Shukri al-Quwatli, Roger of Salerno, Constantine II of Scotland, and Ibn Muqla.