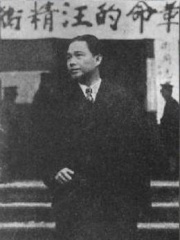 Wang Jingwei (Wang Ching-wei; 4 May 1883 – 10 November 1944), born as Wang Zhaoming (Wang Chao-ming), but widely known by his pen name "Jingwei", was a Chinese politician. He was initially a member of the left wing of the Kuomintang (KMT), leading a government in Wuhan in opposition to the right-wing government in Nanjing, but later became increasingly anti-communist after his efforts to collaborate with the Chinese Communist Party ended in political failure. Read more on Wikipedia

Among politicians, Wang Jingwei ranks 1,924 out of 15,710. Before him are Halimah bint Abi Dhuayb, Amenmesse, Moshe Katsav, Princess Joséphine Charlotte of Belgium, John I of Castile, and John, Prince of Asturias. After him are Mohamed Naguib, Lothair II, Maria Manuela, Princess of Portugal, Gnaeus Pompeius Trogus, Charles, Duke of Vendôme, and Harthacnut.