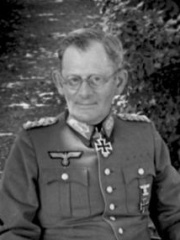 Maximilian Maria Joseph Karl Gabriel Lamoral Reichsfreiherr von und zu Weichs an der Glon (12 November 1881 – 27 September 1954) was a field marshal in the Wehrmacht of Nazi Germany during World War II. Born into an aristocratic family, Weichs joined the Bavarian cavalry in 1900 and fought in the First World War. At the outbreak of the Second World War he commanded the XIII Corps in the invasion of Poland. He later commanded the 2nd Army during the invasions of France, Yugoslavia and the Soviet Union. In August 1942 during Case Blue, the German offensive in southern Russia, he was appointed commander of Army Group B. Read more on Wikipedia

Maximilian von Weichs is most famous for being the commander of the German 6th Army during the Battle of Stalingrad.