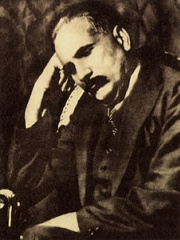 Sir Muhammad Iqbal (Urdu: محمد اقبال; 9 November 1877 – 21 April 1938), was a South Asian Muslim writer, philosopher, and politician, whose poetry in the Urdu language is considered among the greatest of the twentieth century, and whose vision of a cultural and political ideal for the Muslims of British-ruled India was to animate the impulse for Pakistan. He is commonly referred to by the honorific Allama (from Persian: علامہ, romanized: ʿallāma, lit. 'very knowing, most learned').Born and raised in Sialkot, Punjab in an ethnic Kashmiri Muslim family, Iqbal completed his B.A. and M.A. at the Government College Lahore. He taught Arabic at the Oriental College, Lahore from 1899 until 1903. Read more on Wikipedia

Muhammad Iqbal is most famous for being a poet and philosopher. He is also known for being the first person to translate the Quran into English, and for being a founding member of the All-India Muslim League.

Among WRITERS In Pakistan