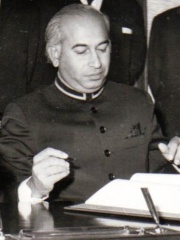 Zulfikar Ali Bhutto (Sindhi: ذوالفقار علي ڀٽو‎; Urdu: ذُوالفِقار علی بُھٹّو‎‎; 5 January 1928 – 4 April 1979) was a Pakistani barrister and politician who served as the 9th Prime Minister of Pakistan from 1973 to 1977, and prior to that as the fourth President of Pakistan from 1971 to 1973. He was also the founder of the Pakistan People's Party (PPP) and served as its chairman until his execution in 1979.Born in modern-day Sindh and educated at the University of California, Berkeley and the University of Oxford, Bhutto trained as a barrister at Lincoln's Inn, before entering politics as one of President Iskander Mirza's cabinet members, and was assigned several ministries during President Ayub Khan's military rule from 1958. Appointed Foreign Minister in 1963, Bhutto was a proponent of Operation Gibraltar in Kashmir, leading to war with India in 1965. Read more on Wikipedia

Zulfikar Ali Bhutto was the first democratically elected Prime Minister of Pakistan. He was also the founder of the Pakistan Peoples Party.

Among politicians, Zulfikar Ali Bhutto ranks 3,046 out of 15,710. Before him are Stefan Uroš V, Sima Shi, Abaoji, Grigory Orlov, Samudragupta, and Sun Hao. After him are Anastasio Somoza García, Hiram I, Prince Arthur, Duke of Connaught and Strathearn, Charles the Younger, Harald Gille, and Menelik I.