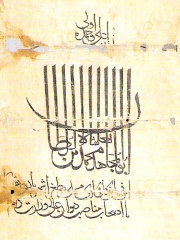 Muhammad bin Tughluq (1290 – 20 March 1351) was the eighteenth sultan of the Delhi Sultanate, reigning from February 1325 until his death. He was the eldest son of Ghiyath al-Din Tughluq, the founder of the Tughlaq dynasty. Ghiyasuddin sent the young Muhammad to the Deccan to campaign against king Prataparudra of the Kakatiya dynasty whose capital was at Warangal in 1321 and 1323. Read more on Wikipedia

Among politicians, Muhammad bin Tughluq ranks 2,618 out of 15,577. Before him are Anna of Tyrol, Princess Cecilie of Greece and Denmark, Alexandre Colonna-Walewski, Iziaslav I of Kiev, Li Hongzhang, and Muršili II. After him are Petronilla of Aragon, Charles III of Navarre, Albert Frederick, Duke of Prussia, Gaston Doumergue, George V of Hanover, and Harald Greycloak.