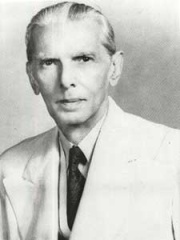 Muhammad Ali Jinnah (born Mahomedali Jinnahbhai; 25 December 1876 – 11 September 1948) was a barrister, politician and the founder of Pakistan. Jinnah served as the leader of the All-India Muslim League from 1913 until Pakistan's creation on 14 August 1947, and then as Pakistan's first Governor-General until his death. He is revered in Pakistan as Quaid-i-Azam ("Great Leader") and Baba-i-Qaum, ("Father of the Nation"). Read more on Wikipedia

Since 2007, the English Wikipedia page of Muhammad Ali Jinnah has received more than 6,312,336 page views. His biography is available in 82 different languages on Wikipedia making him the 1,908th most popular politician.