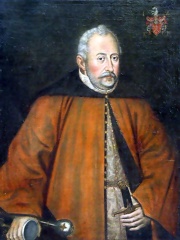 Jan Sariusz Zamoyski (Latin: Ioannes Zamoyski de Zamoscie; 19 March 1542 – 3 June 1605) was a Polish nobleman, magnate, and the 1st ordynat of Zamość. He served as the Royal Secretary from 1565, Deputy Chancellor from 1576, Grand Chancellor of the Crown from 1578, and Great Hetman of the Crown from 1581. Zamoyski was the General Starost of the city of Kraków from 1580 to 1585, Starost of Bełz, Międzyrzecz, Krzeszów, Knyszyn and Tartu. Read more on Wikipedia

Among politicians, Jan Zamoyski ranks 6,476 out of 15,710. Before him are Countess Louise Juliana of Nassau, Goran Hadžić, Dawda Jawara, William IV, Duke of Aquitaine, William, Duke of Jülich-Cleves-Berg, and Adolph John I, Count Palatine of Kleeburg. After him are García Fernández of Castile, Anton Korošec, Bairam Khan, Marien Ngouabi, Joe Davis, and Maxwell D. Taylor.