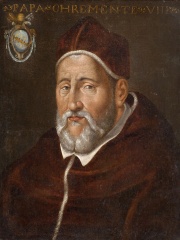 Pope Clement VIII (Latin: Clemens VIII; 24 February 1536 – 5 March 1605), born Ippolito Aldobrandini, was Bishop of Rome and hence head of the Catholic Church and ruler of the Papal States from 2 February 1592 to his death in 1605. Born in Fano, Italy to a prominent Florentine family, he initially came to prominence as a canon lawyer before being made a Cardinal-Priest in 1585. In 1592 he was elected Pope and took the name of Clement. Read more on Wikipedia

Pope Clement VIII was most famous for his suppression of the Society of Jesus, or Jesuits. The Jesuits were a Catholic religious order founded by Ignatius of Loyola and approved by Pope Paul III in 1540. The Jesuits were known for their missionary work, education, and intellectualism.

Among religious figures, Pope Clement VIII ranks 127 out of 2,272. Before him are Agatha of Sicily, Hassan-i Sabbah, Pope John XXII, Pope Leo XII, Anselm of Canterbury, and Pope Gregory IX. After him are Pope Benedict XIV, Bridget of Sweden, Barnabas, Pope Paul V, Miriam, and Pope Leo I.