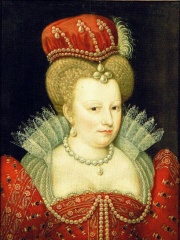 Margaret of Valois (French: Marguerite, 14 May 1553 – 27 March 1615), popularly known as La Reine Margot, was a French princess of the Valois dynasty who became Queen of Navarre by marriage to Henry III of Navarre and then also Queen of France at her husband's 1589 accession to the latter throne as Henry IV. Margaret was the daughter of King Henry II of France and Catherine de' Medici and the sister of Kings Francis II, Charles IX and Henry III. Her union with the King of Navarre, which had been intended to contribute to the reconciliation of Roman Catholics and the Huguenots in France, was tarnished six days after the marriage ceremony by the St Bartholomew's Day massacre and the resumption of the French Wars of Religion. In the conflict between Henry III of France and the Malcontents, she took the side of Francis, Duke of Anjou, her younger brother, which caused Henry to have a deep aversion towards her. As Queen of Navarre, Margaret also played a pacifying role in the stormy relations between her husband and the French monarchy. Read more on Wikipedia

Margaret of Valois was the daughter of King Louis XII of France and Queen Anne of Brittany. She was married to King Henry VIII of England. She was most famous for her role in the War of the Roses, which was a civil war in England.

Page views of Margaret of Valois by language

Among noblemen, Margaret of Valois ranks 44 out of 842. Before her are Marie Thérèse of France, Otto von Habsburg, Alexander Nevsky, Queen Sofía of Spain, Pope Leo IX, and Princess Beatrice of the United Kingdom. After her are Henry IV of England, Arthur, Prince of Wales, Giuliano de' Medici, Louis Antoine, Duke of Angoulême, Edward the Black Prince, and Grand Duke Michael Alexandrovich of Russia.