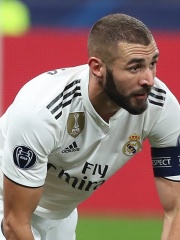 Karim Mostafa Benzema (born 19 December 1987) is a French professional footballer who plays as a striker for La Liga club Real Madrid and the France national team. A creative and prolific forward known for his playmaking and finishing, he is regarded as one of the best forwards of his generation.Born in Lyon to Algerian parents, Benzema began his senior career with hometown club Olympique Lyonnais in 2005, contributing sporadically to three Ligue 1 title wins. In 2008, he was named National Union of Professional Footballers (UNFP) Player of the Year and in the Team of the Year as he finished as the league's top goalscorer and won his fourth title and first Coupe de France. Read more on Wikipedia