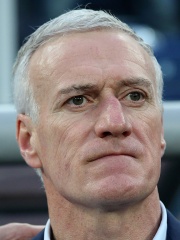 Didier Claude Deschamps (French pronunciation: ​[didje klod deʃɑ̃]; born 15 October 1968) is a French professional football manager and former player who has been manager of the France national team since 2012. He played as a defensive midfielder for several clubs, in France, Italy, England and Spain, namely Marseille, Juventus, Chelsea and Valencia, as well as Nantes and Bordeaux. Nicknamed "the water-carrier" (French: le porteur d'eau) by former France teammate Eric Cantona, Deschamps was an intelligent and hard-working defensive midfielder who excelled at winning back possession and subsequently starting attacking plays, and also stood out for his leadership throughout his career. Read more on Wikipedia

Didier Deschamps is most famous for being the manager of the French national football team.