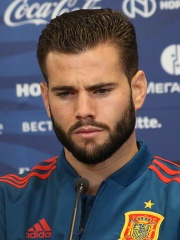 José Ignacio Fernández Iglesias (Spanish pronunciation: [xoˈse iɣˈnaθjo feɾˈnandeθ iˈɣlesjas]; born 18 January 1990), known as Nacho (Spanish pronunciation: [ˈnatʃo]), is a Spanish professional footballer who plays as a defender for Real Madrid and the Spain national team. He has spent his entire career with Real Madrid after making his debut with the first team in 2011, making over 200 appearances and winning several trophies, including five Champions Leagues. Nacho won his first senior cap for Spain in 2013, and was on the squad at the 2018 FIFA World Cup. Read more on Wikipedia

Page views of Nachos by language