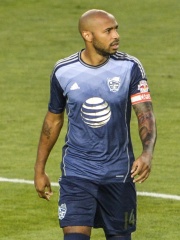 Thierry Daniel Henry (born 17 August 1977) is a French professional football coach, pundit, and former player who is an assistant coach for the Belgium national team. Considered one of the best strikers of all time and one of the best players to play in the Premier League, Henry was runner-up for the Ballon d'Or in 2003, FIFA World Player of the Year in 2004, and finished third place for the Ballon d'Or in 2006. He was named the FWA Footballer of the Year a record three times, the PFA Players' Player of the Year a joint-record two times, and was named in the PFA Team of the Year six consecutive times. Read more on Wikipedia

Thierry Henry is most famous for being a French professional footballer who played as a forward. He played for Monaco, Juventus, Barcelona, New York Red Bulls, and Arsenal.