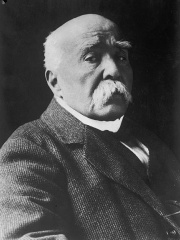 Georges Eugène Benjamin Clemenceau (, also US: , French: [ʒɔʁʒ bɛ̃ʒamɛ̃ klemɑ̃so]; 28 September 1841 – 24 November 1929) was a French statesman who served as Prime Minister of France from 1906 to 1909 and again from 1917 until 1920. A popular figure of the Independent Radicals, he played a central role in the politics of the Third Republic, most notably successfully leading the country through the end of the First World War. After about 1,400,000 French soldiers were killed between the German invasion and Armistice, he demanded a total victory over the German Empire. Read more on Wikipedia

Since 2007, the English Wikipedia page of Georges Clemenceau has received more than 967,260 page views. His biography is available in 60 different languages on Wikipedia making him the 520th most popular politician.

Among politicians, Georges Clemenceau ranks 516 out of 14,801. Before him are Rudolf Höss, Alfonso XIII of Spain, Zenobia, Baibars, Manuel I Komnenos, and Geronimo. After him are Sergio Mattarella, Władysław II Jagiełło, Maximian, Didius Julianus, Emperor Jimmu, and Agrippina the Younger.