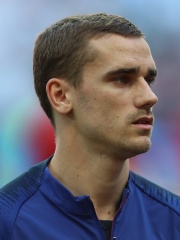 Antoine Griezmann (French pronunciation: ​[ɑ̃twan ɡʁijɛzman]; born 21 March 1991) is a French professional footballer who plays as a forward for Spanish club Barcelona and the France national team. Born and raised in Mâcon, Griezmann began his senior career as a member of Spanish side Real Sociedad in 2009, with whom he won the Segunda División title in his first season, departing five seasons later to join Atlético Madrid for a then-club record €30 million. Although featuring mostly as a winger during his time with Sociedad, Griezmann adapted his game in Madrid to become a complete forward, and quickly became the focal point of the team. Read more on Wikipedia