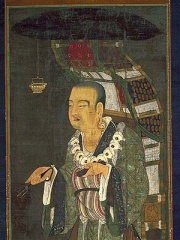 Xuanzang ([ɕɥɛ̌n.tsâŋ], Chinese: 玄奘; 602–664), born Chen Hui / Chen Yi (陳禕), also known as Hiuen Tsang, was a 7th-century Chinese Buddhist monk, scholar, traveler, and translator. He is known for the epoch-making contributions to Chinese Buddhism, the travelogue of his journey to India in 629–645 CE, his efforts to bring over 657 Indian texts to China, and his translations of some of these texts.Xuanzang was born on 6 April 602 in Chenliu, what is now Kaifeng municipality in Henan province. As a boy, he took to reading religious books, and studying the ideas therein with his father. Read more on Wikipedia

Xuanzang is most famous for the journey he took to India in search of Buddhist scriptures.

Page views of Xuanzangs by language

Among explorers, Xuanzang ranks 19 out of 405. Before him are Francisco Pizarro, Abel Tasman, David Livingstone, Prince Henry the Navigator, Fridtjof Nansen, and Erik the Red. After him are Jacques Cousteau, Pedro Álvares Cabral, Jacques Cartier, Leif Erikson, Vitus Bering, and Juan Sebastián Elcano.

Among EXPLORERS In China