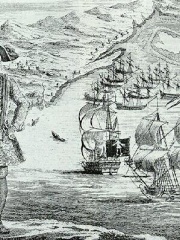 Bartholomew Roberts (17 May 1682 – 10 February 1722), born John Roberts, was a Welsh pirate and the most successful pirate of the Golden Age of Piracy (measured by vessels captured), taking over 400 prizes in his career. Roberts raided ships off the Americas and the West African coast between 1719 and 1722; he is also noted for creating his own Pirate Code, and adopting an early variant of the Skull and Crossbones flag. Roberts' infamy and success saw him become known as The Great Pyrate and eventually as Black Bart (Welsh: Barti Ddu), and made him a popular subject for writers of both fiction and non-fiction. Read more on Wikipedia

Bartholomew Roberts was a Welsh pirate who raided ships in the Caribbean and off the coast of Africa from 1719 to 1722. He was the most successful pirate of the Golden Age of Piracy, capturing more than 400 ships.

Among pirates, Bartholomew Roberts ranks 7 out of 25. Before him are Hayreddin Barbarossa, Blackbeard, Henry Morgan, Eric of Pomerania, Alexander Selkirk, and Anne Bonny. After him are Calico Jack, Mary Read, D. B. Cooper, William Kidd, François l'Olonnais, and Sextus Pompey.