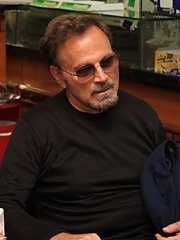 Francesco Clemente Giuseppe Sparanero (born 23 November 1941), known professionally as Franco Nero, is an Italian actor, producer, and director. His breakthrough role was as the title character in the Spaghetti Western film Django (1966), which made him a pop culture icon and launched an international career that includes over 200 leading and supporting roles in a wide variety of films and television programmes.During the 1960s and 1970s, Nero was actively involved in many popular Italian "genre trends", including poliziotteschi, gialli, and Spaghetti Westerns. His best-known films include The Bible: In the Beginning... Read more on Wikipedia

Franco Nero is most famous for his portrayal of Django in the 1966 film "Django".