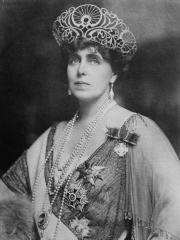 Marie of Romania (born Princess Marie Alexandra Victoria of Edinburgh; 29 October 1875 – 18 July 1938) was the last Queen of Romania as the wife of King Ferdinand I. Marie was born into the British royal family. Her parents were Prince Alfred, Duke of Edinburgh (later Duke of Saxe-Coburg and Gotha) and Grand Duchess Maria Alexandrovna of Russia. Marie's early years were spent in Kent, Malta and Coburg. Read more on Wikipedia

Marie of Romania was most famous for being the wife of King Ferdinand of Romania.

Page views of Marie of Romanias by language

Among politicians, Marie of Romania ranks 2,239 out of 15,710. Before her are Jie of Xia, Intef I, Daniel of Galicia, Thomas Sankara, Juvénal Habyarimana, and Arthur Liebehenschel. After her are Albert, King of Sweden, Chlodwig, Prince of Hohenlohe-Schillingsfürst, Siad Barre, Safi of Persia, Nebra, and Princess Cecilie of Greece and Denmark.

Among people born in 1875, Marie of Romania ranks 19. Before her are Albert I of Belgium, Mikhail Kalinin, Edgar Rice Burroughs, Vallabhbhai Patel, Fritz Kreisler, and Gilbert N. Lewis. After her are Giovanni Gentile, Mikalojus Konstantinas Čiurlionis, Antonio Machado, Edgar Wallace, John Buchan, and Paul Landowski. Among people deceased in 1938, Marie of Romania ranks 26. Before her are Mary Mallon, Suzanne Valadon, Osip Mandelstam, Maud of Wales, Bruno Taut, and Vasily Blyukher. After her are Grand Duke Kirill Vladimirovich of Russia, Feodor Chaliapin, Nikolai Kondratiev, Hans Christian Gram, Cecilia Bowes-Lyon, Countess of Strathmore and Kinghorne, and Franz I, Prince of Liechtenstein.