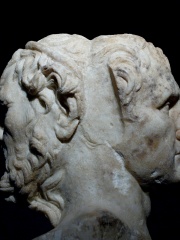 Theognis of Megara (Greek: Θέογνις ὁ Μεγαρεύς, Théognis ho Megareús) was a Greek lyric poet active in approximately the sixth century BC. The work attributed to him consists of gnomic poetry quite typical of the time, featuring ethical maxims and practical advice about life. He was the first Greek poet known to express concern over the eventual fate and survival of his own work and, along with Homer, Hesiod and the authors of the Homeric Hymns, he is among the earliest poets whose work has been preserved in a continuous manuscript tradition (the work of other archaic poets is preserved as scattered fragments). In fact more than half of the extant elegiac poetry of Greece before the Alexandrian period is included in the approximately 1,400 lines of verse attributed to him (though several poems traditionally attributed to him were composed by others, e.g. Read more on Wikipedia

Theognis of Megara is most famous for his elegies, which are poems about the trials and tribulations of love.

Page views of Theognis of Megaras by language

Among writers, Theognis of Megara ranks 813 out of 5,755. Before him are Ambrose Bierce, Christopher Tolkien, Muriel Spark, Issei Sagawa, Jane Hawking, and Menippus. After him are Theodoret, Hans Fallada, Emilio Salgari, Heliodorus of Emesa, Milorad Pavić, and Jean Anouilh.

Others Deceased in 485 BC