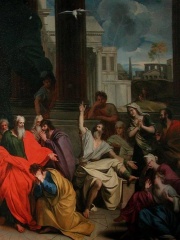 Agabus (Greek: Ἄγαβος) was an early follower of Christianity mentioned in the Acts of the Apostles as a prophet. Read more on Wikipedia

Since 2007, the English Wikipedia page of Agabus has received more than 186,008 page views. His biography is available in 27 different languages on Wikipedia. Agabus is the 762nd most popular religious figure (up from 768th in 2019), the 364th most popular biography from Turkey (up from 367th in 2019) and the 55th most popular Religious Figure.

Agabus is most famous for predicting the famine that occurred in Jerusalem during the reign of Claudius.

Page views of Agabuses by language

Among religious figures, Agabus ranks 762 out of 2,238. Before him are Gemma Galgani, Mikao Usui, Abdullah ibn Saba', Sun Myung Moon, William of Gellone, and Hans Egede. After him are Eugen Sandow, Giuseppe Moscati, Sasan, József Mindszenty, Charles Spurgeon, and Nahor, son of Serug.