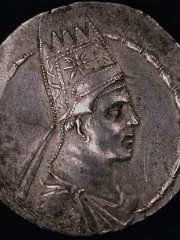 Artavasdes II (Armenian: Արտավազդ Երկրորդը, Ancient Greek: ΑΡΤΑΒΑΖΔΟΥ Artabázēs) was king of Armenia from 55 BC to 34 BC. A member of the Artaxiad Dynasty, he was the son and successor of Tigranes the Great (r. 95–55 BC). His mother was Cleopatra of Pontus, thus making his maternal grandfather the prominent Pontus king Mithridates VI Eupator. Read more on Wikipedia

Since 2007, the English Wikipedia page of Artavasdes II of Armenia has received more than 53,878 page views. His biography is available in 28 different languages on Wikipedia making him the 2,838th most popular politician.

Among politicians, Artavasdes II of Armenia ranks 2,820 out of 14,801. Before him are Basarab I of Wallachia, Charles VII of Sweden, Qi of Xia, Emperor Go-Kashiwabara, Lee Teng-hui, and Hamad bin Isa Al Khalifa. After him are Liu Bian, Yitzhak Navon, William Pitt the Younger, Seleucus IV Philopator, Gustav Heinemann, and Edvard Kardelj.

Others Deceased in 31 BC