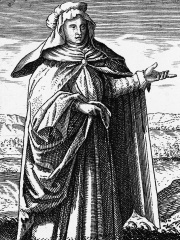 Mary or Maria the Jewess (Latin: Maria Hebraea), also known as Mary the Prophetess (Latin: Maria Prophetissima), is an early alchemist who is known from the works of the Gnostic Christian writer Zosimos of Panopolis. On the basis of Zosimos's comments, she lived between the first and third centuries A.D. in Alexandria. French, Taylor and Lippmann list her as one of the first alchemical writers, dating her works at no later than the first century.She is credited with the invention of several kinds of chemical apparatus and is considered to be the first true alchemist of the Western world.Through Zosimos many of the beliefs of Mary the Jewess can be observed. Read more on Wikipedia

Mary the Jewess is most famous for being the first person to describe the process of distillation.

Page views of Mary the Jewesses by language

Among people born in 100, Mary the Jewess ranks 17. Before her are Pope Victor I, Justin Martyr, Thecla, Cornelius the Centurion, Lydia of Thyatira, and Philemon. After her are Philip the Evangelist, Agabus, Domitia Longina, Ananias of Damascus, Antipas of Pergamum, and Agrippa the Skeptic. Among people deceased in 100, Mary the Jewess ranks 33. Before her are Herod Agrippa II, Papias of Hierapolis, Cornelius the Centurion, Silas, Lydia of Thyatira, and Mary of Bethany. After her are Judas of Galilee, Locusta, Philip the Evangelist, Valerius Maximus, Agabus, and Ananias of Damascus.

Among INVENTORS In Egypt

Among inventors born in Egypt, Mary the Jewess ranks 1. After her are Roland Moreno (1945).