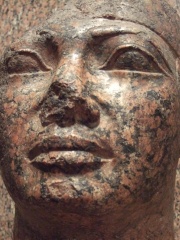 Shebitku (Ancient Egyptian: šꜣ-bꜣ-tꜣ-kꜣ, Neo-Assyrian: 𒃻𒉺𒋫𒆪𒀪 šapatakuʾ, Ancient Greek: Σεθῶν Sethōn) also known as Shabataka or Shebitqo, and anglicized as Sethos, was the second pharaoh of the Twenty-fifth Dynasty of Egypt who ruled from 714 BC – 705 BC, according to the most recent academic research. He was a son of Piye, the founder of this dynasty. Read more on Wikipedia

Since 2007, the English Wikipedia page of Shebitku has received more than 127,277 page views. His biography is available in 24 different languages on Wikipedia. Shebitku is the 6,642nd most popular politician (down from 5,096th in 2019).

Page views of Shebitkus by language

Among politicians, Shebitku ranks 6,642 out of 15,577. Before him are Publius Mucius Scaevola, Alikhan Bukeikhanov, Amar-Sin, Dersu Uzala, Afonso I, Duke of Braganza, and Antipope Benedict X. After him are Edward Smith-Stanley, 14th Earl of Derby, Rose Francine Rogombé, Beatrice of Burgundy, Lady of Bourbon, Ralph I, Count of Vermandois, Infanta Eulalia of Spain, and Prince Sixtus of Bourbon-Parma.