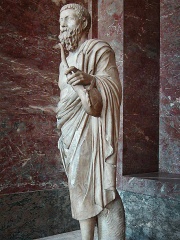 Semonides of Amorgos (; Greek: Σημωνίδης ὁ Ἀμοργῖνος, variantly Σιμωνίδης; fl. 7th century BC) was a Greek iambic and elegiac poet who is believed to have lived during the seventh century BC. Fragments of his poetry survive as quotations in other ancient authors, the most extensive and well known of which is a satiric account of different types of women which is often cited in discussions of misogyny in Archaic Greece. The poem takes the form of a catalogue, with each type of woman represented by an animal whose characteristics—in the poet's scheme—are also characteristic of a large body of the female population. Read more on Wikipedia

Page views of Semonides of Amorgos by language

Among writers, Semonides of Amorgos ranks 1,577 out of 5,794. Before him are Théodore de Banville, Jean-François Marmontel, Ildefonsus, Oliver Goldsmith, Monique Wittig, and Marie de Gournay. After him are Enzo of Sardinia, Arseny Tarkovsky, Watchman Nee, Sri Chinmoy, Anna Leonowens, and Augusto Roa Bastos.

Others Deceased in 550 BC