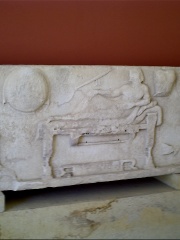 Archilochus (; Greek: Ἀρχίλοχος Arkhilokhos; c. 680–645 BC) was a Greek lyric poet of the Archaic period from the island of Paros. He is celebrated for his versatile and innovative use of poetic meters, and is the earliest known Greek author to compose almost entirely on the theme of his own emotions and experiences.Alexandrian scholars included him in their canonic list of iambic poets, along with Semonides and Hipponax, yet ancient commentators also numbered him with Tyrtaeus and Callinus as the possible inventor of the elegy. Read more on Wikipedia

Archilochus was a Greek poet who wrote in the 7th century BC. He is most famous for his poems about war, love, and wine.

Page views of Archilochuses by language

Among writers, Archilochus ranks 351 out of 5,794. Before him are Margaret Atwood, Henry James, Kenzaburō Ōe, Théophile Gautier, Sholem Aleichem, and Paul Celan. After him are Paul Heyse, W. B. Yeats, Dan Brown, Filippo Tommaso Marinetti, Jean Genet, and Apollonius of Rhodes.

Others Deceased in 645 BC