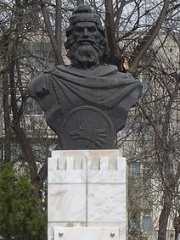 Burebista (Ancient Greek: Βυρεβίστας, Βοιρεβίστας) was a Thracian king of the Getae and Dacian tribes from 82/61 BC to 45/44 BC. He was the first king who successfully unified the tribes of the Dacian Kingdom, which comprised the area located between the Danube, Tisza, and Dniester rivers and modern day Romania. In the 7th and 6th centuries BC it became home to the Thracian peoples, including the Getae and the Dacians. From the 4th century to the middle of the 2nd century BC the Dacian peoples were influenced by La Tène Celts who brought new technologies with them into Dacia. Read more on Wikipedia

Since 2007, the English Wikipedia page of Burebista has received more than 186,947 page views. His biography is available in 36 different languages on Wikipedia making him the 2,392nd most popular politician.

Page views of Burebistas by language

Among politicians, Burebista ranks 2,376 out of 14,801. Before him are Fumimaro Konoe, Magnus I of Sweden, Carlo Azeglio Ciampi, John of Saxony, Eugène Edine Pottier, and Sher Shah Suri. After him are Georges Couthon, Emperor Kōshō, Ferdinando II de' Medici, Grand Duke of Tuscany, Smendes, Chlodwig, Prince of Hohenlohe-Schillingsfürst, and Ammar ibn Yasir.

Others Born in 82 BC

Others Deceased in 44 BC