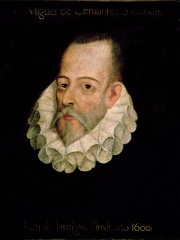 Miguel de Cervantes Saavedra (Spanish: [miˈɣel de θeɾˈβantes saaˈβeðɾa]; 29 September 1547 (assumed) – 22 April 1616 NS) was a Spanish writer widely regarded as the greatest writer in the Spanish language, and one of the world's pre-eminent novelists. He is best known for his novel Don Quixote, a work often cited as both the first modern novel, and one of the pinnacles of literature.Much of his life was spent in poverty and obscurity, many of its details are disputed or unknown, and the bulk of his surviving work was produced in the three years preceding his death. Read more on Wikipedia

Since 2007, the English Wikipedia page of Miguel de Cervantes has received more than 2,561,718 page views. His biography is available in 163 different languages on Wikipedia making him the 34th most popular writer.