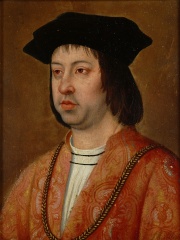 Ferdinand II (Aragonese: Ferrando; Catalan: Ferran; Basque: Errando; Spanish: Fernando; 10 March 1452 – 23 January 1516) was King of Aragon from 1479 until he died in 1516. As the husband of Queen Isabella I of Castile, he was King of Castile from 1474 to 1504 as Ferdinand V. He reigned over a dynastically unified Spain jointly with Isabella; together they are known as the Catholic Monarchs. Ferdinand is considered de facto the first king of Spain, being described as such during his own lifetime, although Castile and Aragon remained de jure two different kingdoms until the Nueva Planta decrees of 1707 to 1716.The Crown of Aragon that Ferdinand inherited in 1479 included the kingdoms of Aragon, Valencia, Majorca, Sardinia, and Sicily, as well as the Principality of Catalonia. Read more on Wikipedia

Ferdinand II of Aragon was the King of Aragon, Catalonia, Valencia, Majorca, Sicily, and Naples. He was also the King of Castile and León, as well as the joint King of Portugal. He was the son of John I of Aragon and his second wife, Juana Enríquez.

Page views of Ferdinand II of Aragons by language

Among politicians, Ferdinand II of Aragon ranks 228 out of 15,710. Before him are Louis XVIII of France, Charles I of Austria, Salman of Saudi Arabia, Lucius Tarquinius Superbus, Suleiman II, and Harald V of Norway. After him are Leopold I, Holy Roman Emperor, Christina, Queen of Sweden, Charles IX of France, Mahmud II, Lech Wałęsa, and Sulla.