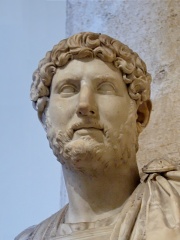 Hadrian (; Latin: Caesar Trâiānus Hadriānus [ˈkae̯sar trajˈjaːnʊs (h)adriˈjaːnʊs]; 24 January 76 – 10 July 138) was Roman emperor from 117 to 138. He was born in Italica (close to modern Santiponce in Spain), a Roman colony of Italic settlers in Hispania Baetica; his family, the Aelii Hadriani, came from the Italian city of Atri in Picenum and were either among the original founders of Italica or moved there at a later time between the third century BC and the first century AD. His father was of senatorial rank and was a first cousin of Emperor Trajan. Hadrian married Trajan's grand-niece Vibia Sabina early in his career, before Trajan became emperor and possibly at the behest of Trajan's wife Pompeia Plotina. Read more on Wikipedia

Since 2007, the English Wikipedia page of Hadrian has received more than 5,303,930 page views. His biography is available in 88 different languages on Wikipedia (up from 85 in 2019). Hadrian is the 105th most popular politician (down from 89th in 2019), the 14th most popular biography from Spain and the 5th most popular Politician.

Hadrian was most famous for building a wall in Britain.

Page views of Hadrians by language

Among politicians, Hadrian ranks 105 out of 15,577. Before him are Theodosius I, Kim Il-sung, Frederick I, Holy Roman Emperor, Pontius Pilate, Mehmed III, and Philip IV of France. After him are Mary II of England, Herod the Great, Hermann Göring, Isabella I of Castile, Yasser Arafat, and Pepin the Short.