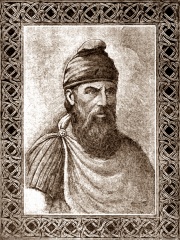 Decebalus (r. 87 – 106 AD) was the last king of Dacia. He is famous for fighting three wars, with varying success, against the Roman Empire under two emperors. Read more on Wikipedia

Since 2007, the English Wikipedia page of Decebalus has received more than 288,578 page views. His biography is available in 41 different languages on Wikipedia making him the 895th most popular politician.

Page views of Decebaluses by language

Among politicians, Decebalus ranks 890 out of 14,801. Before him are Dagobert I, John Quincy Adams, Guangxu Emperor, Ferdinand I of the Two Sicilies, Ulrika Eleonora, Queen of Sweden, and Emmanuel Joseph Sieyès. After him are Jean-Claude Juncker, Jean Monnet, Gojong of Korea, Luiz Inácio Lula da Silva, Hamza ibn Abdul-Muttalib, and Henry Stuart, Lord Darnley.