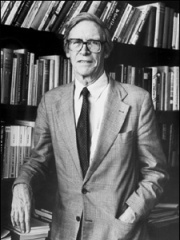 John Bordley Rawls (; February 21, 1921 – November 24, 2002) was an American moral, legal and political philosopher in the liberal tradition. Rawls received both the Schock Prize for Logic and Philosophy and the National Humanities Medal in 1999, the latter presented by President Bill Clinton, in recognition of how Rawls's work "revived the disciplines of political and ethical philosophy with his argument that a society in which the most fortunate help the least fortunate is not only a moral society but a logical one".In 1990, Will Kymlicka wrote in his introduction to the field that "it is generally accepted that the recent rebirth of normative political philosophy began with the publication of John Rawls's A Theory of Justice in 1971". Rawls has often been described as one of the most influential political philosophers of the 20th century. Read more on Wikipedia

John Rawls is most famous for his work in political philosophy, which he called "justice as fairness." Rawls argued that a society is just if it meets two conditions: (1) all citizens have the same basic liberties and opportunities, and (2) inequalities are to the greatest benefit of the least advantaged.

Among philosophers, John Rawls ranks 138 out of 1,081. Before him are Giambattista Vico, Bonaventure, Swami Vivekananda, Rudolf Christoph Eucken, Baron d'Holbach, and Wilhelm Dilthey. After him are Isocrates, Zhu Xi, Edith Stein, Jiddu Krishnamurti, Clement of Alexandria, and Simone Weil.

Among people born in 1921, John Rawls ranks 10. Before him are Astor Piazzolla, Stanisław Lem, Andrei Sakharov, Jean-Bédel Bokassa, Michael I of Romania, and Suharto. After him are Fawzia Fuad of Egypt, Yves Montand, Hua Guofeng, Fahd of Saudi Arabia, Joseph Beuys, and Giulietta Masina. Among people deceased in 2002, John Rawls ranks 8. Before him are Princess Margaret, Countess of Snowdon, Astrid Lindgren, Simo Häyhä, Pierre Bourdieu, Thor Heyerdahl, and Hans-Georg Gadamer. After him are Billy Wilder, Richard Harris, Vavá, Prince Claus of the Netherlands, Traudl Junge, and László Kubala.