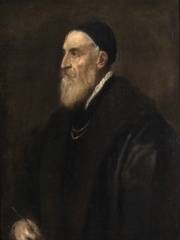 Tiziano Vecelli or Vecellio (pronounced [titˈtsjaːno veˈtʃɛlljo]; c. 1488/90 – 27 August 1576), known in English as Titian ( TISH-ən), was an Italian (Venetian) painter of the Renaissance, considered the most important member of the 16th-century Venetian school. He was born in Pieve di Cadore, near Belluno. During his lifetime he was often called da Cadore, 'from Cadore', taken from his native region.Recognized by his contemporaries as "The Sun Amidst Small Stars" (recalling the final line of Dante's Paradiso), Titian was one of the most versatile of Italian painters, equally adept with portraits, landscape backgrounds, and mythological and religious subjects. Read more on Wikipedia

Titian is most famous for his paintings of religious scenes.

Page views of Titians by language

Among painters, Titian ranks 20 out of 1,421. Before him are Francisco Goya, Sandro Botticelli, Diego Velázquez, Paul Cézanne, Henri Matisse, and Paul Gauguin. After him are Donatello, Gustav Klimt, Pieter Bruegel the Elder, Eugène Delacroix, Édouard Manet, and Wassily Kandinsky.