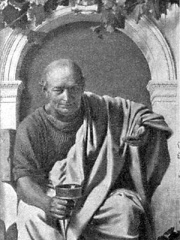 Quintus Horatius Flaccus (Classical Latin: [ˈkᶣiːn̪t̪ʊs̠ (h)ɔˈraːt̪iʊs̠ ˈfɫ̪akːʊs̠]; 8 December 65 – 27 November 8 BC), known in the English-speaking world as Horace (), was the leading Roman lyric poet during the time of Augustus (also known as Octavian). The rhetorician Quintilian regarded his Odes as just about the only Latin lyrics worth reading: "He can be lofty sometimes, yet he is also full of charm and grace, versatile in his figures, and felicitously daring in his choice of words."Horace also crafted elegant hexameter verses (Satires and Epistles) and caustic iambic poetry (Epodes). The hexameters are amusing yet serious works, friendly in tone, leading the ancient satirist Persius to comment: "as his friend laughs, Horace slyly puts his finger on his every fault; once let in, he plays about the heartstrings".His career coincided with Rome's momentous change from a republic to an empire. Read more on Wikipedia

Since 2007, the English Wikipedia page of Horace has received more than 2,216,330 page views. His biography is available in 96 different languages on Wikipedia. Horace is the 32nd most popular writer, the 34th most popular biography from Italy (down from 32nd in 2019) and the 6th most popular Italian Writer.

Horace is most famous for his work as a lyric poet.

Page views of Horaces by language

Others Born in 65 BC

Others Deceased in 8 BC