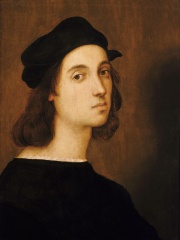 Raffaello Sanzio da Urbino, better known as Raphael (; US: or ; March 28 or April 6, 1483 – April 6, 1520), was an Italian painter and architect of the High Renaissance. His work is admired for its clarity of form, ease of composition, and visual achievement of the Neoplatonic ideal of human grandeur. Together with Leonardo da Vinci and Michelangelo, he forms the traditional trinity of great masters of that period.Raphael was enormously productive, running an unusually large workshop and, despite his early death at 37, leaving a large body of work. Read more on Wikipedia

Since 2007, the English Wikipedia page of Raphael has received more than 5,893,076 page views. His biography is available in 159 different languages on Wikipedia (up from 153 in 2019). Raphael is the 4th most popular painter, the 10th most popular biography from Italy and the 2nd most popular Painter.

Raphael is most famous for his paintings of the Madonna and Child.

Page views of Raphaels by language

Among painters, Raphael ranks 4 out of 1,421. Before him are Michelangelo, Vincent van Gogh, and Pablo Picasso. After him are Rembrandt, Frida Kahlo, Salvador Dalí, Claude Monet, Johannes Vermeer, Peter Paul Rubens, Albrecht Dürer, and Edvard Munch.