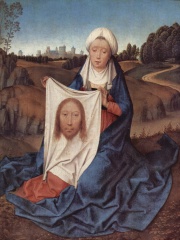 Saint Veronica, also known as Berenike, was a woman from Jerusalem who lived in the 1st century AD, according to extra-biblical Christian sacred tradition. A celebrated saint in many pious Christian countries, the 17th-century Acta Sanctorum published by the Bollandists listed her feast under July 12, but the German Jesuit scholar Joseph Braun cited her commemoration in Festi Marianni on 13 January. According to Church tradition, Veronica was moved with sympathy seeing Jesus carrying the cross to Calvary and gave him her veil so that he could wipe his forehead. Read more on Wikipedia

Saint Veronica is most famous for the story of how she wiped Jesus's face with her veil and the image of his face was left on the cloth.

Among religious figures, Saint Veronica ranks 229 out of 2,272. Before her are Pope Sixtus I, Maximilian Kolbe, Pope Alexander III, Pope Urban III, Cyprian, and John of the Cross. After her are Pope Felix I, Ubba, Pope Benedict XIII, Amos, Pope Dionysius, and Pope Pelagius I.

Among people born in 1, Saint Veronica ranks 8. Before her are Thomas the Apostle, Saint Stephen, Simon the Zealot, Barnabas, Saint Matthias, and Pope Linus. After her are Pope Anacletus, Barabbas, Thomas Bangalter, Silas, Onesimus, and Locusta. Among people deceased in 1, Saint Veronica ranks 1. After her are Mary of Clopas, Domitilla the Elder, Tigranes IV, Cleomedes, Agrippa, and Zenobia of Armenia.