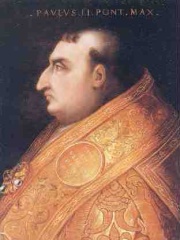 Pope Paul II (Latin: Paulus II; 23 February 1417 – 26 July 1471), born Pietro Barbo, was head of the Catholic Church and ruler of the Papal States from 30 August 1464 to his death in 1471. When his maternal uncle Eugene IV became pope, Barbo switched from training to be a merchant to religious studies. His rise in the Church was relatively rapid. Read more on Wikipedia

Among people born in 1417, Pope Paul II ranks 1. After him are Sejo of Joseon, Nicholas of Flüe, Sigismondo Pandolfo Malatesta, Louis IX, Duke of Bavaria, and Sin Sukju. Among people deceased in 1471, Pope Paul II ranks 2. Before him is Henry VI of England. After him are Thomas à Kempis, Edward of Westminster, Prince of Wales, George of Poděbrady, Isabella of Portugal, Duchess of Burgundy, Thomas Malory, Richard Neville, 16th Earl of Warwick, Frederick II, Elector of Brandenburg, João Gonçalves Zarco, Emperor Go-Hanazono, and Borso d'Este, Duke of Ferrara.