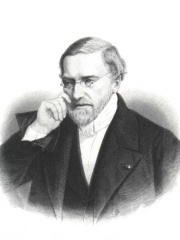 Jean-Victor Poncelet (French pronunciation: ​[ʒɑ̃ viktɔʁ pɔ̃slɛ]; 1 July 1788 – 22 December 1867) was a French engineer and mathematician who served most notably as the Commanding General of the École Polytechnique. He is considered a reviver of projective geometry, and his work Traité des propriétés projectives des figures is considered the first definitive text on the subject since Gérard Desargues' work on it in the 17th century. He later wrote an introduction to it: Applications d'analyse et de géométrie.As a mathematician, his most notable work was in projective geometry, although an early collaboration with Charles Julien Brianchon provided a significant contribution to Feuerbach's theorem. Read more on Wikipedia

Jean-Victor Poncelet was a French mathematician who is most famous for the development of the theory of projective geometry.

Among people born in 1788, Jean-Victor Poncelet ranks 5. Before him are Arthur Schopenhauer, Lord Byron, Sarah Baartman, and Augustin-Jean Fresnel. After him are Princess Augusta of Bavaria, Infante Carlos, Count of Molina, Catherine Pavlovna of Russia, Robert Peel, Princess Wilhelmine of Baden, Christian Jürgensen Thomsen, and Archduke Rudolf of Austria. Among people deceased in 1867, Jean-Victor Poncelet ranks 9. Before him are Charles Baudelaire, Maximilian I of Mexico, Emperor Kōmei, Théodore Rousseau, Otto of Greece, and Franz Bopp. After him are Sakamoto Ryōma, Maria Theresa of Austria, Maximilian Anton, Hereditary Prince of Thurn and Taxis, Elias Howe, Princess Sophie of Saxony, and Archduchess Mathilda of Austria.

Among MATHEMATICIANS In France