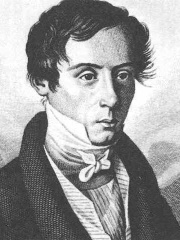 Augustin-Jean Fresnel (10 May 1788 – 14 July 1827) was a French civil engineer and physicist whose research in optics led to the almost unanimous acceptance of the wave theory of light, excluding any remnant of Newton's corpuscular theory, from the late 1830s  until the end of the 19th century. He is perhaps better known for inventing the catadioptric (reflective/refractive) Fresnel lens and for pioneering the use of "stepped" lenses to extend the visibility of lighthouses, saving countless lives at sea. Read more on Wikipedia

Augustin-Jean Fresnel is most famous for his work in optics, which led to the invention of the Fresnel lens.

Among people born in 1788, Augustin-Jean Fresnel ranks 4. Before him are Arthur Schopenhauer, Lord Byron, and Sarah Baartman. After him are Jean-Victor Poncelet, Princess Augusta of Bavaria, Infante Carlos, Count of Molina, Catherine Pavlovna of Russia, Robert Peel, Princess Wilhelmine of Baden, Christian Jürgensen Thomsen, and Archduke Rudolf of Austria. Among people deceased in 1827, Augustin-Jean Fresnel ranks 6. Before him are Ludwig van Beethoven, Alessandro Volta, Pierre-Simon Laplace, Johann Heinrich Pestalozzi, and William Blake. After him are Frederick Augustus I of Saxony, Wilhelm Hauff, Samuel Crompton, Maria Theresa of Austria, Ugo Foscolo, and Ernst Chladni.